5 Foods That Fix the Gut-Brain Connection

If you’ve ever had a “gut feeling” you know there’s an intricate gut-brain connection in your body. Like two friends who love to talk on the phone all night long, the communication system between your gut and brain is constant – it is what scientists call the gut-brain axis. And, they greatly impact each other: studies show your brain affects your gut health, and your gut health influences your brain. Here’s what research has to say about the gut-brain connection and how nutrition plays a role in your health.

What is the Connection Between the Gut and the Brain?

The brain and gut are connected both physically and biochemically. One of the largest nerves in your body connects your gut and your brain, it’s called the vagus nerve. There are an estimated 500 million neurons in your gut sending messages to your brain. As for the biochemical connection between your gut and brain, the gut is an impressive producer of neurotransmitters. In the brain, neurotransmitters control emotions and other functions.

3 Ways the Gut-Brain Are Connected

One neurotransmitter worth knowing about is serotonin – which is vital for the processing of emotional regulation, hunger, sleep, and pain, as well as colonic motility and secretory activity in the gut. With sufficient tryptophan present (a precursor to serotonin), a healthy gut can be a huge producer of serotonin. In other words, a happy gut can lead to a happier you.

Another type of molecule made in the gut is short-chain fatty acids (SCFAs). Microbes produce butyrate and other SCFAs when they digest fiber. SCFAs have been found in research studies to influence the brain, in particular, helping to reduce appetite.

Yet, there is another way the gut and brain are connected that may surprise you. The way the gut and the brain communicate is greatly influenced by the immune system. The immune system is an important coordinator between the two. When the microbes in your gut aren’t healthy, it can lead to immune dysregulation. In fact, the microbes in your gut community can regulate brain development, mood, and cognitive function, according to studies. Chronic inflammation not only changes the microbiota composition, but it can also trigger significant and long-lasting behavioral changes, such as the development of cognitive impairment and depression. The immune system is crucial for gut-brain signaling. Reducing inflammation in the gut, and the presence of microbes there that trigger inflammation is important for mental health.

This two-directional communication between the gut and the brain, called the gut-brain axis plays a role in mental health. Evidence from neuroscience research shows the microbiota (the ecosystem of microbes that inhabit the gut), appears to play a major role in the development and maturation of brain systems, as well as in our ability to respond to stress. The microbes in your gut send messages to your brain through the many neurons in the gastrointestinal tract, as well as through neurotransmitters (neuronal system), cytokines (immune system), and hormones (metabolic pathways). With 1 billion people in the world reporting emotional, psychological, and neurological imbalances, it’s imperative to focus on a healthy gut in pursuit of achieving mental health.

How Do I Fix My Gut-Brain Connection?

Here are 5 science-backed foods worth eating and supplements that researchers are finding play a role in the health of your gut-brain connection:

Sources of dietary fiber are differently associated with prevalence of depression. Nutrients 2020 Sep; 12(9):2813.

Known for her deliciously geeky words, Allison’s articles and books are read around the world by those curious about where to find the most delicious (and nutritious) places to stick their forks. More at allisontannis.com. Follow @deliciouslygeeky. 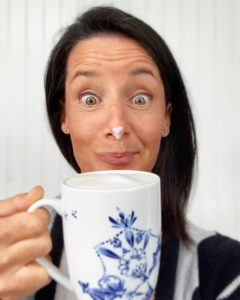