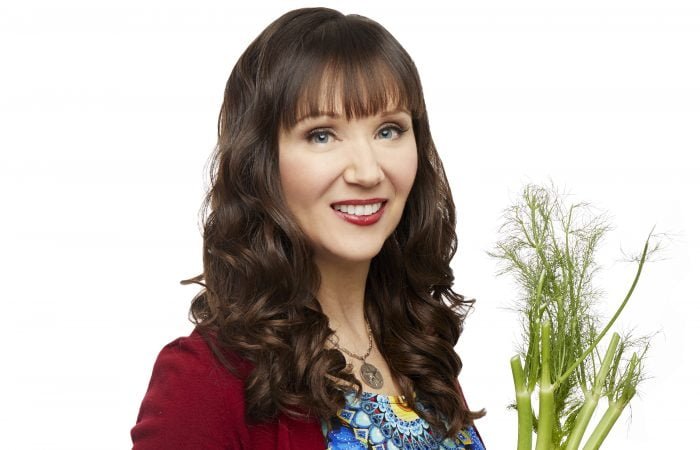 While mastering the rigorous theatre arts program at George Brown Theatre College, Julie found she was reading more about nutrition than Shakespeare. She had developed an insatiable appetite for figuring out how and why food affects our health, and decided to pursue a new direction, attending the Canadian School of Natural Nutrition to become a Registered Holistic Nutritionist™ professional. Julie became co-op owner & Chief In-Store Nutritionist, at one of Canada’s largest health food stores, The Big Carrot.

Serving on the board of the Canadian Health Food Association in 2000 & 2009, exploring Culinary Arts at George Brown College, and studying Herbalism at Emerson Herbal College allowed Julie to bring together many distinct talents to author her #1 bestselling, Gourmand World Cookbook Award-winning books. Meals That Heal Inflammation and Slimming Meals That Heal (Random House, Canada, Hay House Publishers USA/UK/AUZ) continue to educate readers on the connection between food and inflammation. Through her books and her TV show, Healthy Gourmet, Julie has helped hundreds of thousands of people enjoy great-tasting, allergy-free foods while boosting their body’s healing process. Over the past 10 years, Healthy Gourmet has aired in 78 countries and 11 different languages.

Julie’s latest book, Hot Detox (Harper-Collins Canada, Hay House USA/UK), embraces the ancient wisdom of India and Asia, applying the time-tested intelligence of warming up your body’s core. Inspired by hot yoga practices and backed by 900 peer-reviewed scientific studies, Julie’s detox system will help your body to gently rid many of the toxins you experience in our modern world.

Julie’s book, Hot Detox (Harper-Collins Canada, Hay House USA/UK), became a Canadian bestseller and remained on the 2017 Top 10 Globe & Mail list for 11 weeks. Hot Detox embraces the ancient wisdom of India and Asia, applying the time-tested intelligence of warming up your body’s core. Inspired by hot yoga practices and backed by peer-reviewed scientific studies, Julie’s detox system will help your body to gently rid many of the toxins you experience in our modern world.

Julie’s 4th book (Penguin/Random House Canada), was released in September 2021. Julie has spoken to the Canadian Federal Government in Parliament about the health risks of genetically modified food and was a founding board member of the Non-GMO Project. She was the producer for Bio-Diversity with David Suzuki and FoodShare’s Field to Table Festival. One of her greatest joys was her role as a chef on Greenpeace’s The Rainbow Warrior, during its GE-free New Zealand tour. Julie received the 2012 Canadian Health Food Association’s Organic Achievement Award.

Television viewers may also recognize Julie from her appearances on programs such as The Dr. Oz Show, CTV News, Global TV, The Social and Canada AM. She is in her 9th season as a monthly contributor to CTV’s The Marilyn Denis Show.

Julie loves to share! You can find out what she has to offer on her website (juliedaniluk.com) and watch for her articles in publications such as Chatelaine Magazine, Reader’s Digest, Vitality, Alive, Canadian Living and Vista. Be sure to connect directly with Julie on Facebook, by tagging @juliedaniluk on Twitter and Instagram, and subscribing to Julie’s Meals That Heal TV YouTube channel. 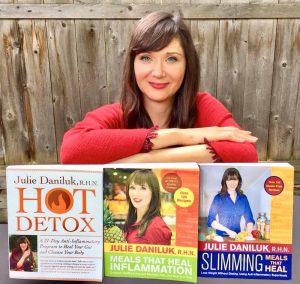