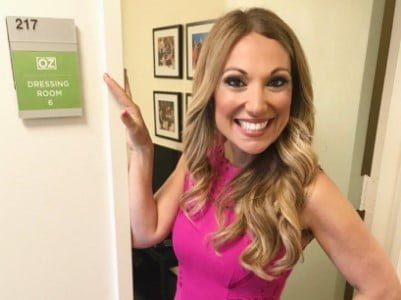 Peggy Kotsopoulos is a Registered Holistic Nutritionist™ professional and Culinary Consultant focused on teaching real health through lifestyle and dietary choices that are easy and delicious!

She is the Host of her own cooking show “Peggy K’s Kitchen Cures” on Veria Network and the Author of “Must Have been Something I Ate” and “Kitchen Cures” (Penguin, 2013). Peggy has been coined as the “New IT Girl of Alternative Health” by Dr. Oz himself, and has been featured as an expert on his show. She is also a returning guest on NBC’s TODAY Show, The Talk (CBS), Access Hollywoood Live (NBC) and is the resident Nutrition Correspondent on The Goods (CBC). She has also been featured on The Daily Show yahoo.com, Huffington Post Online, Martha Stewart Morning Living, Better TV, KTLA, CBC news, CTV news, CityTV news, Breakfast Television, CosmoTV and Virgin Radio.

As a Commerce graduate from the University of Toronto, Peggy originally spent a successful, 7-year career in investments prior to nutrition. During this time, Peggy couldn’t help but let her true passion for nutrition and healthy eating diffuse throughout the corporate sector. At business meetings, while the standard fair of ‘bagels and danishes’ did not suffice, Peggy would bring her own guilt-free goodies. As colleagues and clients became intrigued, the demand for information on food and health became so overwhelming that Peggy started leading seminars and founded a company wide corporate wellness program. Finally, while attending a health conference in the U.S., Peggy reflected on what she really wanted in life and decided to follow her passion wholeheartedly. She left her investment career, packed up her belongings and headed south.

Since then, Peggy has obtained her R.H.N. designation from the Canadian School of Natural Nutrition, she has completed her Health Educator Certification from Hippocrates Health Institute in West Palm Beach Florida, graduated from Living Light Culinary Arts Institute in California, and founded beVibrant – her wellness consultancy in Toronto. As Principal of beVibrant wellness consulting, she now develops and delivers wellness programs servicing large corporate clients, she has instilled healthy habits amongst thousands of children and youth through the design and delivery of school wellness programs and acts as a culinary consultant to various food establishments.

Peggy is dedicated to promoting long-term health and vitality. And she’s on a mission… to make REAL health mainstream!